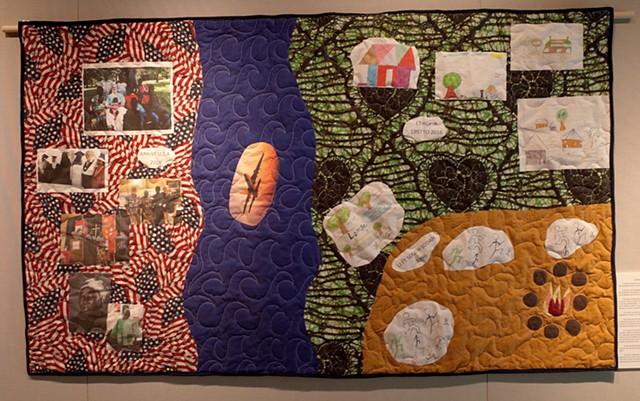 This is a family with 7 children, Mother, Father and Grandmother. One of the children is the son of a sister that still lives in the refugee camp in Ethiopia.

The work on this quilt began with the Grandmother gathering the children around her to tell them about life in South Sudan. She told a story of happiness, living in a village and gathering every night around a campfire as friends and family took turns telling stories. War broke out and bombs were dropped. Suddenly everything was destroyed. The people ran. They ran and ran and ran. They ran at night, so they would not be seen and slept in the bushes during the days to hide. They ran until they reached Ethiopia. In Ethiopia they lived in a compound. In their family the adults had one hut, the children a smaller hut, and an even smaller hut for a kitchen. They were relatively safe there, but there was no security to protect them from theft or conflicts.

The children then drew pictures of the story told by Grandma. They added some of their own from what they remembered in Ethiopia. All of the children were born in Ethiopia. The mother and father were also married in Ethiopia as they were young adolescents when their families fled.

The pictures show the campfire storytelling in South Sudan and the running. In Ethiopia there are pictures of the huts in the compound and the two trees that were there. The school is bright colors as the school they attended was bright colors. There are two pictures that include their church. When asked about this the response was, “We were asked to draw what was important to us, and this was the most important.”

The family lived in this compound in Ethiopia for 19 years. Their food and supplies came from what was provided by UNICEF. One of the pictures shows a picture of a lady outside the hut and a little girl under a tree. When asked about this picture the girl said, “Do you remember the day Mommy, when you were working so hard and missed the UNICEF truck, so we did not have any food? I was playing outside under the tree and found some money. When I brought it to you, you took it and told me we would eat that day because I had found that money.” The mother confirmed this story.

When the grandmother saw the finished quilt, she pounded her heart and my heart with a fist, and her arms around me, then said with tears in her eyes, “Now they will not forget.”

The family is now doing well in Kansas City. Both parents are employed. Grandma cares for the children while parents work, and the school age children are good students. They worry that the sister still in the camp will not be able to come with the reduced numbers of refugees being admitted. The pain in this, realizing that she may not see what a nice young man her son is growing to be is significant.