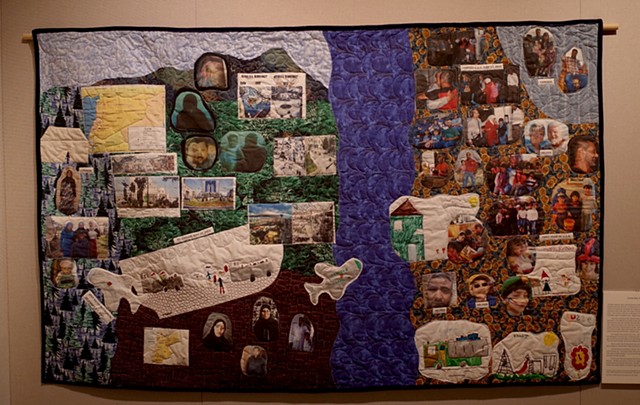 This family wanted to make a quilt with pictures of their home in Syria, but all of their photographs were left behind when they fled home. An internet search for their hometown provided five pictures. The father looked at the pictures and rearranged them explaining that one picture was the city center that they passed every day on their way to the mosque. He placed the mosque in the proper position to the city center. Then he took a closer look at the picture in the very center of a yellow or tan building. He immediately called his daughter to see. Together they exclaimed, “That is our house!”

They lived on the ground floor where the father had a tailoring business. An older brother and family lived on the middle floor and another brother and his family lived on the top floor. When the home was bombed the family fled, including sisters and their families. The extended family lived in a single room, taking turns sleeping, since there was no room for everyone to lie down. The brothers gathered money to hire trucks to take the family to Jordan. Finally, they were able to hire two trucks. One sister and her family of eight children were unable to join the convoy. Her family were later able to travel to Lebanon where they are still living in a refugee camp.

One daughter drew pictures of the trucks. She said they traveled for hours in an open truck with their belongings in a second truck. Occasionally, they were stopped by men at a checkpoint. They had to get out of the truck and wait while the men went through their belongings and took what they wanted. Then they would ride again until the next checkpoint where more things were stolen.

Once in Jordan, they moved several times until they settled in a small apartment. The father then flew to Lebanon to visit his sister to make certain she was safe. The first brother was admitted to Canada. The second brother was the first Syrian refugee to come to Kansas City. The younger brother whose family made this quilt arrived in Kansas City in 2016. Other family members pictured on this quilt are still awaiting admission to countries where they can be near family and feel safe again.

The final part of this quilt represents their first year in Kansas City and their favorite events during that year. The father was seriously injured in the collapse of his home and has severe back pain. He receives physical therapy and medical care. He works in his home as a tailor when he is able. The children are excellent students. The family is happy to be in the United States and making new friends.